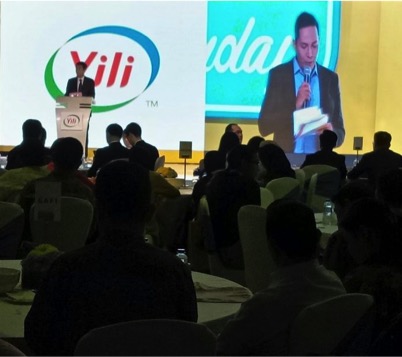 In his remarks, Satria Bakti, Vice President Director of PT Green Asia Food Indonesia said: "Focusing on teenagers, Joyday Ice Cream comes with 11 delicious flavors, appears colorful, and is very easy to obtain. We want to meet the needs of teenagers who want to enjoy delicious meals with friendly prices and food safety standards from BPOM RI and halal certification from LPPOM MUI to ensure there is always excitement and happiness in every bite. We encourage teens to live life to the full and explore life with a positive mood with Joyday ice Cream. Also present at the launch event was the Mayor of Hohhot City, Inner Mongolia, Feng Yuzhen, who said: ‘We congratulate Yili Group for the launch of the 66th Joyday Ice Cream in Indonesia. As an important part of Hohhot City, Yili is also a leading representative company of the City of China Dairy. I hope Yili will provide nutrition and health for more consumers by using the best products and services in the world. “

Our goal is to put as many smiles on faces as teenagers, encourage them to control happiness in their lives, and explore life to the fullest with pleasure, knowing that Happy Day is Joyday. For teenagers in Indonesia, excitement and fun starts now. Whenever you feel sad, whenever you need encouragement, enjoy Joyday Ice Cream and rediscover your excitement and pleasure, "concluded Satria Bakti.

Joyday Ice Cream is produced by PT. Green Asia Food Indonesia and uses milk and quality ingredients with international standard, safe and halal certified from BPOM RI and LPPOM MUI to ensure there is always happiness in every bite. Joyday wants anyone who enjoys it to always feel happy whenever and in any situation Happy Day Joyday. Through a selection of delicious ice cream flavors, Joyday wants to make sure we all can feel happiness every day. (Yanti)